Check out this image. 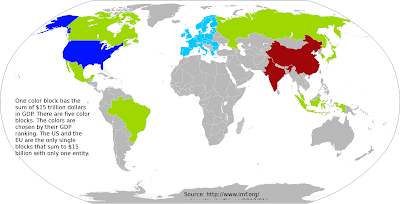 And then there’s the other 30 trillion.

The creator lumped Canada, Mexico, Brazil, Russia, South Korea, Japan and Indonesia into a group. Then everybody else into another group.

Groupings like this are useful because they’re summaries. They enable really close comparisons.

It’s a method doesn’t just have to apply to GDP on maps.

You can make comparisons in analysis as well. Saying, for instance, that all the traffic in Inter-Mountain West are equivalent to Chicago, might be a good shorthand.