Models are amazing. And they’re really necessary if you’re going to excel in Analytics.

Consider the model below.

It’s how I think as a marketer and a marketing scientist: 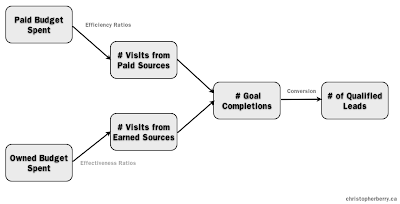 I have one major goal this quarter. It’s the # of Qualified Leads. This is my optimization objective.

It doesn’t have to be yours. Your will vary. However, for this quarter, I’m all about the # of Qualified Leads.

If I have your email address because you met me at a conference, I own that channel. If I have a twitter account, or a blog (I do), then I own those channels too. And I produce content – like an invitation, an update, or a post (like this one), and put it out onto those owned channels.

I may own the channel, but I’ll have earned your visit.

The relationship between the budget I spend on those channels, and you visiting the site, is an effectiveness measure[1].

Then there’s paid spend. It’s money I pay media companies to interrupt you during your day. It’s display advertising, it’s pre-rolls, it’s ads. It’s interruption media. And, it’s in areas that I don’t own myself. I have to pay for the opportunity to divert you. And, it’s not so much a question of effectiveness, it’s all about efficiency. How many people can I divert into my site?

I have two primary mechanisms then. I can interrupt people or I can draw on relationships. And, how well the content and context performs is what generates the efficiency or effectiveness of the traffic to the site.

Once they’re on the site – what then?

The statistical tests to gauge the strength of the relationship between the goals I have selected and the optimization objective. It’s a pretty strong correlation. But that doesn’t guarantee causality. What if there’s a confounding factor? What if my goals are spurious? What if there isn’t true independence among the variables? However, my model says it’s causal (see the arrow?), so, I’m going to make decisions as though it is causal [2] [3].

In fact, I’m going to base decisions around the model as though it’s all causal.

And isn’t that beautiful? Building a model is as easy as (or as hard as) thinking about why things happen. It also takes courage. What if you’re wrong [4]?

Testing a model and updating your understanding in accordance with the evidence, not your own expectations or preferences, well, that’s the real hard part, isn’t?

[1] There are at least five competing definitions for paid, earned, and owned at the time of writing. Pick the one that makes the most sense to you, and rewrite the labeling on the simplified model.
[2] Until such time it’s demonstrated that it isn’t really causal, at which point I’ll update my model to reflect that truth. Science!
[3] The correlation isn’t causality statement was originally a warning to have a model in place before you blindly try to find relationships in the data. It’s now duckspeak.
[4] You might be.