If you’re in the #smm or #measure community, you know the impact that tweeting has had on the English (written) language (online). Never before has the @ and # been (ab)used so much. But what about the impact it has had on how we consume media together?

Twitter is an awesome utility. Through it, we find out how our friends are doing, organize trouble, learn, alert, shout, entertain, push, prod, pull and otherwise – communicate. People are amazing adapters. We had to be over the past million years. It’s our competitive advantage. We’re always finding new uses for things and repurposing them. Twitter is no exception. We’ll find some new way to use the medium. 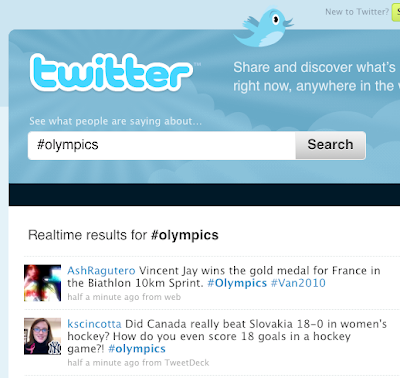 During Friday night, and continuing on until February 28th, people are watching the #olympics and tweeting about it, reacting live.

What was astonishing, on Friday night, was just how many of my friends were live tweeting the #olympic opening ceremonies. And it was a hoot. In 2008 I was pretty much alone in live tweeting during a TV show (and roundly boo’d for it too!). In 2009 I was joined by four or five people.

On Friday night, I was joined by a solid 40 people, reacting to live events, in real time. It wasn’t everybody controlling time with a DVR and having a disjointed experience. Rather, it was a simultaneous, real-time, mass social experience.

The volume of comments produced is impressive. Since Friday, up until right now at the time I’m writing this, fewer than 72 hours, there have been 232,347 tweets using the #olympics hashtag.

It’s a major mine of data and yours to explore.

In the meantime, enjoy watching #olympics with everybody else.