It’s similar to when I was 4, learning how to read numbers, with all the numbers sprawled out in front me on my great-grandmothers kitchen floor – and being intensely frustrated that I’d never remember how to say and write ALL 30 numbers (I had gaps in my knowledge too, I knew of 33, somebody’s age, and 23, a bus number, but 24, for some reason, which wasn’t represented on a piece of paper.) Numbers were just like letters and phonetics — I didn’t see 12 as being 10 plus 2, no more than one recognized five (5) as being 3 plus 2. The numbers were actually memorized as symbols or in clumps, similar to how an accent aigu (e with a little forward slash on top of it) has a different sound from e with an accent circumflex (a little hat). Funny, but I had no conception of any other paradigm.

I got pissed off in trying to organize all the ones I knew though. They didn’t work in 12 columns by 3 rows (I had gaps, and they were not sounding right).

Then having that moment of discovery of place value. Symbols were repeating above 20, and were verbally repeating. Epiphany. The world made sense after 20. It was under 20 where things were really screwed up, and later, especially before 12!

And it’s in your twenties and thirties that I realized there was ‘place value’. It took memorizing enough numbers to get up that high before I connected the phonetic roots with the symbols. (Alas yes, it took me another year, infinite patience, and a set of children’s encyclopedias, to learn how to read properly.)

Screw you, Duodecimal roots! I blame you for the untold days of being pissed off!

I have all these pieces of paper with information on them, and in my usual way, I try to sort through them, putting them into some sort of logical order until the deeper meaning pops out.

And here are bits that popping:

Human thought processes aren’t designed for analytics in the way the word is used today (definitely not the way the word is implied in “web analytics”). Give most humans lots of data or information and their eyes glaze over, their minds go numb. What human thought processes are well designed to do is understand what science calls “anecdotal information” and what business calls “case studies”.

Giant Red X (as in “I’ll sign that petition” in some web communities.)

Science works kind of like this: there’s data, you create a theory that explains the data, you test the theory by doing an experiment that should create similar data, you lather-rinse-repeat the theory-experiment process until the error between theory and experiment is acceptable (the “±2db” people often hear me talk about. What some people call “±2s“).

I owe a lot to the scientific method. And I’m one of those 2 standard deviations people. The statement has since passed into common usage at Critical Mass Toronto.

And this is where being a prisoner to language comes in. The theory-experiment process requires people to think, not do…or at least to think before they do. Having managed labs, I can tell you that there’s lots of thinking before doing because (contrary to opinion) there’s not a lot of money for scientific research so you have to think before you do a lot. Doing and doing incorrectly depletes your budget rapidly and is hence a no-no.

You’d think that companies investing in solutions — any solutions — would like to see the data behind the solutions.

This is rarely the case. Any solution report that doesn’t have bulleted suggestions immediately following the cover page is doomed to go unread, it’s suggestions unheeded in most cases. Drawing from my own experience, the more complex the science, the more business people want you to distill the findings to one or two or at the most three elements. 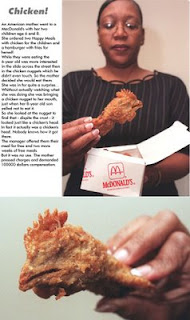 Nuggetmen and Nuggetwomen though would strenuously disagree with the assertion that just because they prefer their insights in Nugget form, that they’re not devoid of thought.

But there’s that reality – though – isn’t there?

Is the trend towards Nuggetization laziness? Is it that decision makers just need to be told what to do, and the rest of the recommendation, the support, just footnotes, (so long as the recommendations conform with the desired outcome)?

Carrabis will go onto argue, I think, that Nuggetization is more a function of the desire for abstraction(?) It’s like we always want to standardize the smaller bits so we can move onto the bigger bits.

I thought for a second and asked, “It doesn’t really matter how much proof we give you or what independent studies we show you, you just don’t believe ET does what we claim, correct?”

Yup. Love the picture of the Gorilla next to it.

This plays directly into Pioneering versus Colonial thinking. Colonists huddle together for mutual defense against the outsider and define anything new or different as a threat. Pioneers expect to encounter new things and are slow to respond except to direct and obvious threat. IE, the latter will think before it acts, the former will act before it thinks.

Colonists huddle for mutual defense of the outsider, and will act before they think.

Pioneers go out expecting new things are are slow to respond except to direct and obvious threat, and will think before it acts.

However, the true majority of people will respond to the anecdote much more intimately (ie, have a direct emotional response) than they will to the science because the anecdote is (you guessed it) more intimate, more personal, provides more connections between “me and thee”. It puts a face on things, it makes the situation human, far easier to understand and because of these two far more believable than not.

Granted. To this day, my approach to learning written Chinese is much the same – a story and meaning associated with every symbol, and then contrasting and comparing similar symbols (the difference between ‘not’ and ‘tree’ is incredibly subtle, for instance, but when you have a story, it’s not so hard).

The tendency to use analogies as a learning device or an explanatory device is really powerful and ingrained.

Anecdotal thinking also allows someone to completely ignore the science and focus on similarities and differences that have no basis in addressing the original problem. For example, company A is shown how web analytics can create financial benefit. Lots of numbers, lots of data. Company A ignores that and asks “What is company B doing?”

It never occurred to me that some people use the comparative method as a crutch. New to me.

This is the power of anecdotal thinking. It allows humans to ignore obvious errors in reasoning and logic and why case studies and recommendations have a great deal more meaning than all the science in the world when it comes to making business cases (and this is true for all but a few borders you may be crossing).

Agreed. That is indeed a root problem of the comparative method. Part of me wants to believe that the use of anecdotes goes back to the fundamental challenge of distinguishing pattern from noise, and that frequently, we’re horrible at that.

Babies crawl and then walk all over the place with a complete disregard for how dangerous the world is. They explore everything because their brains are hungry for information. This experiential information (ie, “doing”) is what creates the mind and later the personalities we recognize they have. Part of that exploration involves the parent or guardian saying “No!” and sometimes reinforcing the “No!” with a firm pat on the butt.

Anyway, the desire to gather data was replaced (in most cases) by a desire to think anecdotally, ie, cautiously. Being cautious helps us survive therefore to heck with logic and science, give me anecdotes each and every time!

Anyway, the desire to gather data was replaced (in most cases) by a desire to think anecdotally, ie, cautiously. Being cautious helps us survive therefore to heck with logic and science, give me anecdotes each and every time!

The problem with anecdotal thinking is that we can be fooled easily. Everyone from magicians to confidence hustlers exploits this. You would think that a tendency towards caution would make us less likely to be fooled, yes?

No, whether colonist or pioneer any ploy to caution will be internalized first and regardless of any scientific evidence contrary.

The defeat of logic. Are we reduced to always adapting marketing science to anecdotes then?

The anecdote — because we’ve acquired the wiring — always wins.

🙁 So are scientific anecdotes the solution?

My power is going off in 5 minutes, and as a result, I’ll be replying to Part 2, as well as expanding on this after a good night sleep.