This is a continuation of a response to:

My previous entry dealt with language issues and why an analytics argument won’t work with any audience.

Surely, it must work with pure marketing scientists? Or no dice?

My previous entry dealt with language issues and why an analytics argument won’t work with any audience. Here I’ll mix in cultural learning and how working memory affects how we interact with clients. It turns out that most people are not only prisoners to language, most people are also prisoners to what they’ve learned, how they learned it and the last time they used it.

The folks in charge of teaching and designing web analytics courses might benefit from knowing that how they present their information in class is going to deeply influence how that discipline will be presented and performed in the real world. This is true of everything, not just web analytics.

People who know me or who have taken part in one of my or NextStage’s classes have heard me talk about my belief that regardless of the subject matter, people who teach really demonstrate to others how they do life. The subject matter is just the vector by which that demonstration occurs. This is one reason I mark a difference between people I recognize as my Teachers and people who stood in front of a class and talked. To me, Teachers know the entirety of what they’re sharing and do so willingly.

Stephane Hamel, for example, teaches some of UBC’s online web analytics courses and shared that there’s little being done to mentor students in real world practice (“…there are a couple of assignments but the feedback are sometimes not very positive (too disconnected with the course content, applied to specific sites instead of their own employer’s site, etc.) they don’t have access to a live tool, or real data, etc.”).

Stephane is currently preparing some courses for Laval University and is working “…to create a text book (maybe even just a structured list of articles to read). The information is all out there, the challenge is to structure it, give it a sense of continuity and think about real situations and cases.”

I’ve known Stephane for a while and have a great deal of respect for him. I’ll also be quite curious about how his future Laval students do applying their knowledge in the real world because (as I’ve pointed out in previous posts and Stephane has admitted to) his thought processes aren’t typical to typical web analysts. His metaphysic is different enough that his differences will be demonstrated to his students via what is called cultural transmission.

So, long story short, how web analytics is done and how it is presented to clients has a lot to do with how it is taught and by whom.

Meanwhile, back in Canada…

So we have web analysts that are being trained to think in a way that doesn’t match the cultural metaphysic or identity, then sell into (make best use cases for) a mindset in ways that don’t demonstrate what that culture recognizes as having value.

And because their training doesn’t include (I admit I’m guessing their training doesn’t include) the tools necessary to adapt facilely to new situations (they are pioneers who have been trained by colonists, primarily) the less than positive experiences become the sum of their experience and their personal metaphysic becomes one of self-fulfilling prophecy (as was demonstrated by the Toronto WAW question, “Why are Canadians so reluctant to embrace data driven strategy?“, that led to these missals).

“Anchor and adjust” springs to mind, and the implications of the model are important, because it all folds in.

Ouch! (and did I mention NextStage is available for trainings?)

And now a return to Christopher Berry’s “A Vexing Problem, Part 4“

You liken my approach to Jim Novo‘s. I’m flattered. Don’t know if Jim is or not.

My use of “if” in “if any of you are interested…” has more to do with my methodology than an intentional structuring of the language, me thinks, although I believe the outcomes are the same even if the motivations that lead to those behaviors is different (a clear case where understanding the {C,B/e,M} matrix is vitally important to solving the problem). I tend to present suggestions backed up with lots of data and research (both NextStage’s and others’) then let clients make their own decisions regarding what suggestions to act upon. You can see this methodology echoed in NextStage’s Principles as applied to cultural transmission — people learn best and most rapidly from their own mistakes (even though that learning will probably be anecdotal in nature).

Skepticism and credibility are topics I dealt with in yesterday’s post, Responding to Christopher Berry’s “A Vexing Problem, Part 4” Post, Part 1.

You also supplied the root of the answer, me thinks, in “Good old fashioned Canadian pragmatism at work.”

Two things fall from this, me thinks, one a question and the other a suggestion (and did you notice how I gave you all the data and research, am offering some suggestions and leaving it up to you to decide?):

Whoosh! And great conversations, folks! I love these kinds of backs&forths.

(and I hope Dr. Geertz is pleased with my use of multi-syllabics in this post. More on The Good Dr. Geertz soon)

So, here goes an attempt to solve the vexing problem:

First, I’m going to neatly arrange all the facts on little pieces of paper.

Canadians are by and large pioneers. They expect to encounter unusual situations, and think first, act second. It’s a country of pragmatists and flexible instrumentation. It’s hell of a lot easier to sell a Sham-Wow that’s a towel, sponge, and pseudo-vacuum cleaner than it is to sell a towel, a sponge, and a wet-vac separately.

Front loading the “what’s in it for you – the client”, directly into any presentation, isn’t as effective as presenting an argument, carefully selecting data, and then leaving the client to decide for themselves if they’ll do anything.

Humans, not just Canadians, have an ‘anchor and adjust’ tendency. Reaching back to my public policy roots, the theory mirrors the entire “path dependence” of organizational behavior almost exactly. We’re cumulative products of our experiences. Unfortunately for web analysts, people tend to be a species of story tellers and analogies. Worse, most Canadians had the curiosity beat right out of their asses by the end of the “Terrible twos”.

But, there’s more! The tendency to use analogies, which is another way of saying “the comparative method” or “case studies”, is that it makes it very easy for logical flaws to go completely unnoticed. This method is also particularly susceptible to “seeing what you want to see”. (There are multiple interpretations to the Three Little Pigs case study – one of which is “blow harder”…not necessarily the right takeaway.)

EVERYBODY LOVES A NUGGET (TM) because everybody seems to love telling short, snappy, stories. 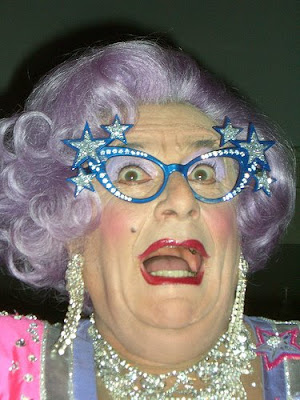 “I’m trying to think of a word that describes what you’re wearing…………….AFFORDABLE!”

Beware of how you socialize analytics into an organization: the impact will long far longer than you will.

My instinct, to solve the vexing problem, is to exploit the weakness in the case study methodology, however, there’s that good old arrogance bone that comes in that says, “no, I don’t have to co-opt that method, the web analytics method is better.”

Like a web analytics lasagna. Only meatier. And with better cheese.