On the Report, Colbert pokes fun at the proliferation of ever seemingly invasive social network technologies. I want to cover off Blippy, Twitter, and go into the impact for social analytics. I’m excited. I think you should be too. 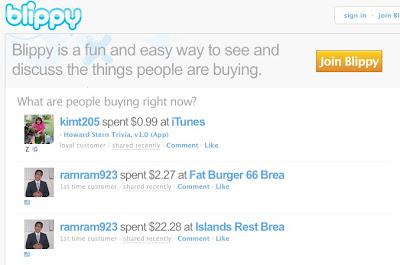 Why would anybody do this?

Because shopping, for many people, is social. Paco Underhill has argued, at least on the NewsHour with Jim Lehrer, that people continue to go to malls just to be around people. And, while I’ve never claimed to understand why certain groups of people like to shop with one another and ‘try on’ clothes and so forth, I’ve certainly observed that behavior.

Ramram923, I thought you were going to to stick to that diet, why the hell are you eating at FatBurger?

So there you have it. This is just one model of why anybody would do this.

Should people use such a medium?

Now let’s get into judgement country.

You say potato, I say social utility, you say social surveillance, I say tomato. Let’s call the whole thing off.

There are plenty of opinions about how and if that medium should be used, and, indeed, there are plenty of uses and much more disuses. All of those opinions doesn’t prevent people from tweeting all sorts of things – from how much they enjoy their baked #potato, to how awesome the lamb is at an Indian restaurant in Leslieville. From rants about #measure, to hawking our latest models – we invent many ways to use the medium.

I’m much less concerned about whether or not a social network should be used for anything and more fascinated with the fact that it is being used for something.

Same logic applies to Blippy. It’s not so much that people should use it or not. It’s the fact that it is being used.

What’s the impact for social analytics?

I’m not making any claims about adoption. If you look at the technological adoption S-curves for a whole bunch of products, you’ll find different saturation points. There’s enough literature elsewhere that covers that off. I’m not saying that Twitter will go to 40% saturation and that Blippy will go to 10% or even 1% for that matter. Though, it is possible even if I don’t think that it’s probable. (Note the language. Slippery aren’t I?)

The impact, for social analytics, is very profound. It represents a dataset we didn’t have just a few years ago. It represents an expanding frontier of well-ordered information. And while I’m presently living through the intellectual purgatory of explaining instrumentation and perception error, I still come into work with a smile upon my face. It’s data that will enhance our understanding of the world for the benefit of our employers, employees and everybody else.

It’s not so much that I’m concerned with the other 99% of us who don’t use it. It’s that I’m more interested in the 1% who do. I’m a modern analyst – I can handle error and ambiguity. Most of you can too. I know you can handle it.

I hope you’re all as excited as I am.