Lowering technology barriers has enabled more people to comment, more often. What effect has this had?

Twitter and Weibo’s, by virtue of limiting the volume of text to be shared, has enabled more people to share more. It’s given rise to link-shortening and exported more SMS language and short-form communication into the mainstream Internet.

There is a tendency amongst some to believe that what you’re reading in the comments is a representation of what people think. There are good models, found in marketing science research, that suggests that people experience products, then consider whether or not they’ll post something, and then moderate their opinions based on the audience. This two-step process is fairly important, especially when it’s applied to professional product reviewers / bloggers, some of whom have been seen to change their opinions when the comments change.

It is not the case that you’re seeing opinion in the same sense of a public opinion poll.

Social commenting studies are not the same as public opinion studies.

A troll goes into a community and makes an outrageous statement for the purpose of creating drama. When drama is created, lulz are generated. The troll sits backs and eats popcorn. 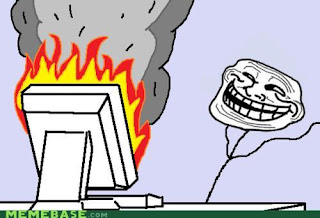 The popularization of trolling has given rise to quite a bit of confusion. 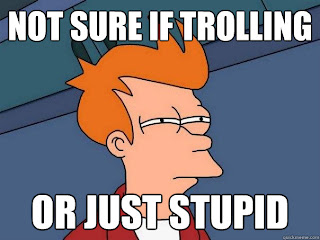 In some instances, especially when talking points are recycled or taken to their natural conclusion, it can become extremely difficult to detect a troll. Some communities are folded trolls upon trolls, and when people who don’t understand what’s going on become involved, the community collapses in upon itself, generating a supernova of buttery popcorn that’s…delicious.

The detection of sarcasm relies on an analog signal that’s very difficult to replicate digitally. We’re taught to detect sarcasm through inflection in voice or facial detection. Online, without that analog signal, it’s extremely difficult to know. It’s why you were told not to be sarcastic in email. Because people can’t tell if you’re sarcastic.

Trolls trolling trolls in an ocean of piss, etc

Find a cleavage. Exploit it. Repeat.

Many people do just that. And it contributes to group polarization. It is likely that polarization would exist regardless of trolls. It simply makes examining the real cleavage, and the real framing, all the more difficult.

Just what percentage of all the comments that you read are actually trolls, those who deliberately misrepresent their position for the purpose of generating drama, versus the honest, versus the genuinely stupid.

The Interpretation Of Text Summary Statistics

Knowing that trolling and self-moderation exist unevenly in populations, just how divergent is the opinion expressed from the opinion actually held? How believable is it?

Text analytics will continue to evolve in a quantitative sense, in that it will become better at reporting observations about how people comment. However, text analytics is ultimately limited by the systematic bias that people themselves generate when they comment.

I’m Christopher Berry.
Follow me @cjpberry
I blog at christopherberry.ca