Many technologists prefer users respond by hitting single buttons. Liking, wanting, upvoting, downvoting, thumbs up, thumbs down, share, +1, retweeting, favouriting and so on. Facebook is entirely focused on the affirmative actions. Reddit enables both actions.

Commenting requires a bit more effort, in that the user usually uses keyboard to generate a comment, hitting multiple keys, and sometimes creating words or even expressing a well formed thought.

And so, it must follow, there’s an attention economy around commenting.

Herp Derp is a browser plugin that turns YouTube comments into the words ‘Herp Derp’. 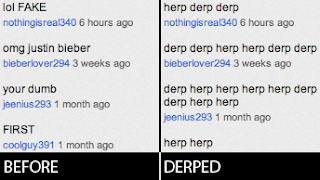 Literally Unbelievable is a site that captures screencaps from Facebook of people reacting to articles from The Onion. If it’s worthy of satire and derision, it’s having an impact.

These three examples are what we can see. What about the effects we can’t observe directly?

I’m Christopher Berry.
Follow me @cjpberry
I blog at christopherberry.ca