I’ll confess that one of my favourite lolcats is Skeptical Cat is Fraught with Skepticism. 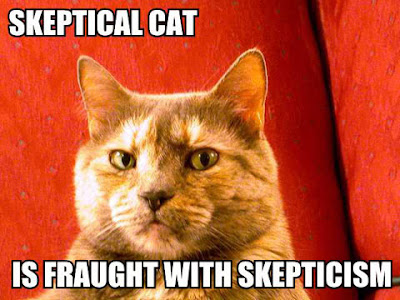 Look deep into that expression. The cat really does look skeptical, doesn’t he? He’s not believing a single word you’re thinking right now.

There’s also something about that orange background that makes the expression and the entire image that much funnier. I don’t know what it is about it. But I’m aware of the effect. I think anthropologists have a term for the tendency of humans to superimpose human emotions onto animals – which there is no evidence that an animal actually feels. I can’t remember the term, but it’s funny as hell that we all do it.

The reason I bring this is all up is that I deal with skepticism all the time in my line of work as a web analyst and marketing scientist. Sometimes the data disproves long held assumptions about aggregate user behavior and attitudes – which causes skepticism. This rejection of your own hypothesis is something a scientist isn’t troubled about. For non-scientists it can cause all sorts of personal problems. Yet, even with empirical proof, skepticism can persist. They don’t say it out loud, but you can see it in their faces. They’re a skeptical cat. And they’re fraught. With skepticism.

I’m very lucky in my career so far. I manage to manage a team of people and multiple programs while still being a practitioner. I still use statistics to make sense of data. When I’m talking to the consumers of the insights and findings that come out of this work, I don’t talk about regressions and the origins – I translate the results. I make the results actionable and the insights relevant to their interests.

The consumers of these insights don’t need to understand the nitty gritty of sampling error or SPSS syntax. Could you imagine trying to explain all that? “It all started off with a gambler in the 1600’s…. and then Laplace….and then just before prohibition they wanted to put statistics on the table and scientific advertising….”. Ha!

So it goes with this NextStage skepticism.

Some of the greatest inventions in the world are discovered by combining two unusual technologies and deleting anything that is unnecessary. Invention typically requires strong lateral thinking.

Two years ago I was deeply troubled by the “optimization cycle problem” of web analytics, and reckoned that if physical technology got us into this, it could get us out. It led down a number of wonderful research rat holes and inquiries.

I got introduced to Joseph Carrabis by way of June Li at eMetrics Toronto in March 2008. What prompted the introduction? I was inquiring about behavioral economics (there’s a sub-field called “evolutionary programming or collective intelligence” – to be precise) as applied to website morphing (which, at the time I was referring to a vague Dutch test of the technology to a medical website. The test failed because they were morphing the nav bar. Website Morphing has since been updated by Hauser et al the next year.). I was trying to learn how to combine these two technologies. June Li figured she had to introduce me to Joseph.

Joseph announced his patent the next day.

Our second conversation pretty much extinguished any lingering skepticism I had. (And the third conversation was probably more unpleasant for everybody involved as I expressed concern about the usage of the technology.). So what happened between the first conversation, the second, and the third?

First, a herd of intelligent people were not skeptical. He has social validity.

Second, if he couldn’t think laterally – odds were that he was a phony. He was a strong lateral thinker and smart to boot. He has personal validity.

Third, he knew things about EP that nobody who was faking it could have known off the cuff. Only somebody who had experienced the data and thought very hard about the problems could have known about it. He answered these needling questions in a manner that had very, very strong face validity.

Fourth, the patent. This is very strong external validity.

NextStage technology incorporates multiple areas and technologies while deleting the extraneous bits. There’s neuroscience, anthropology, statistics, language psychology, behavioral economics (EP/CI) and computer science (specifically: computability). It blends together nicely because it is informed by a central theory that is explanatory and powerful.

Since then, much of what Joseph has demonstrated over the past 18 months meshes with what hasn’t been published (yet – papers have been presented) in the field of decision neuroscience – an emerging sub-discipline in Marketing Science. I have no reason to challenge the veracity of NextStage’s claims because every esoteric challenge has always been met. Their claims have been independently verified and I consider the matter closed. They really invented a new technology. Yes, it can happen.

I don’t believe that 90% of the market researchers and 70% of the data miners I’ve met have ever read or understand Laplace – and yet that doesn’t keep any of those people from using statistics to make judgments about vast numbers of people. Most practitioners don’t have degrees in mathematical science. Are any of these people who practice linear regression on a daily basis ever skeptical of the science that underlines it?

There’s a baseline amount of verification that people need to do on their own. A smell check or a sniff test. Everybody will need their own source of validity. I have mine.

You don’t have to understand how the cow turns grass into milk to drink the milk.

You don’t have to understand how the cat makes that purring sound to enjoy it.

One thought on “Fraught with Skepticism”