“Chief information officers (CIOs) have become somewhat more prominent in the executive suite, and a new kind of professional has emerged, the data scientist, who combines the skills of software programmer, statistician and storyteller/artist to extract the nuggets of gold hidden under mountains of data. Hal Varian, Google’s chief economist, predicts that the job of statistician will become the “sexiest” around. Data, he explains, are widely available; what is scarce is the ability to extract wisdom from them.”
Source: The Economist, Feb 25, 2010

Statisticians are certainly a sexy lot.

I coined the rather curious term stratistician – a cross between a strategist and a statistician, over a lunch with Mark Dykeman on Friday. A lol ensued. Then silence. I think too many of us would confuse the term with former WWE superstar Trish Stratus though. 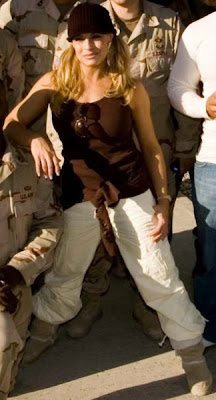 Not a bad impression to press into that brain. (And yes, that was the tamest picture I could find of her. Go do a Google Search.)

Personally, this notion of the scientist-practitioner, the data-scientist, the stratistician – the notion of an analytics beyond reporting – has been a major source of inspiration. I feel like there’s a path out for so many of us who can’t seem to find….wait for it….stratisfaction… in our daily lives. Last pun I promise.

Data is, indeed, widely available. The incidence of people who actively practice statistics while actively practicing programming is very thin. Thankfully, the languages of statistics and programming are starting to come together, and this is very good news. It’s going to become increasingly easier to maintain both skillsets at a competent level.

The storytelling is another story. As is business strategy. I don’t think you can ever have both of those skills completely mastered all the time. People always want to be told the same thing five times and in a different way that keeps them entertained and engaged. Business strategy has fundamental principles – and the particulars tend to drift.

We’ve got a big challenge.

But at least it’s going to be sizzling.

I have resisted the urge to type out one last pun.

One thought on “Hal Varian is right.”