An excellent analysis done by Allan Engelhardt, back in 2006 I suppose, talks about the 3/2 rule of employee productivity. The Coles notes version is that when you triple the number of employees, you cut their productivity in half. Check out the diagram below. 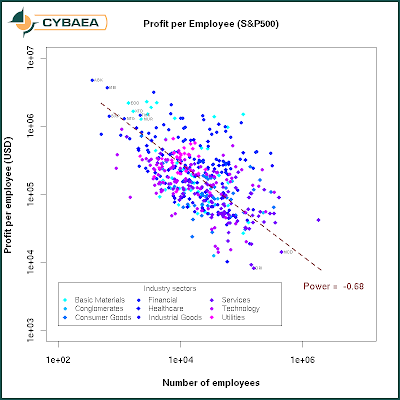 Pretty scary right? Naturally, the story is much more complex than portrayed. Some sectors have mild slopes, like technology companies. Arguably, they’re using technology to flatten out the productivity slope. But it’s still slightly negative.

Small companies are very good at doing many things. They become less good as they become large. And then ultimately, they stop being really, really good at anything at all.

There are many reasons for this. The ones I’m most familiar with has to do with networks and hierarchies.

A group of 8 people are efficient. A group of 16 people are less efficient. We grapple with the phenomenon of the “8000 dollar meeting” (that of feeling like there are far too many people in the room) by imposing a hierarchy on the 16 – anointing 2 to 4 people to meet, and then communicating out to the 12. In so doing, we lose detail, and importantly, understanding. Bottlenecks form. Inevitably, effective people form networks throughout the 16 in an active effort to regain efficiency. And so on it goes, up to 32, 64, and 128.

Productivity is defined as the amount of output for a given amount of cost. Something is efficient if there’s little cost but is high in revenue. So clearly, larger groups of people, are less efficient from purely a communication basis – there’s an incremental cost in terms of it. If the definition of planning is “preparation of the mind”, then that loss of understanding is even worse. It takes time for people to talk through a plan, internalize it, and then go out and make the day to day decisions when the unexpected inevitably arises. That loss of understanding severely impacts both efficiency and effectiveness because it generates paralysis. Worse, it opens up degrees of freedom which can lead to misunderstandings and asymmetrical efforts.

A leader should be judged effective in part on their ability to reduce and minimize asymmetries – not exploit them.

It’s definitely a social law that I’m cognizant of, and need to actively resist. I’m optimistic though, because fundamentally it’s a human problem. And most human problems can be solved by humans.

4 thoughts on “The Productivity Curve and the 3/2 Rule”