It’s the Victoria Day long weekend in most parts of Canada, and, whereas our colleagues in Moncton and Halifax will be working, many analytics practitioners in Toronto and Vancouver will be playing German board games and drinking beer.

One of the most popular of the German board games is “The Settlers of Catan“. If you know the game, skip ahead to the next bold title. If you don’t know the game, read on for a painless summary.

How To Expect The Expected In Catan

Look at the starting map for beginners. 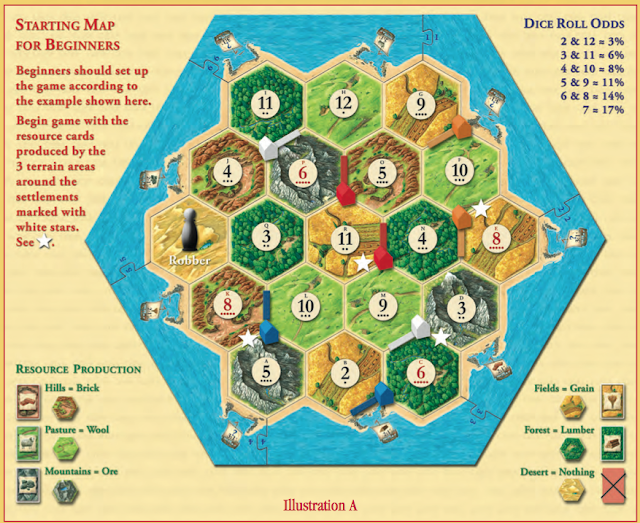 There are 19 hexes (resource squares) and 22 possible and ‘good’ three-way intersections (the desert doesn’t pay out resources). The mechanics of the game creates scarcity in the number of 22 three-way intersections available, as all settlements must be at least one vertex away from the other. I can only count three good three-way intersections left. The ports do confer trading advantages. Note how the blue player can trade in wood for any other resource for 2:1. She can do just fine.

Look at how much information there is on this map. There’s a huge amount of information on that board that assist me in forming expectations about the future. And, I don’t even have to remember all the probabilities of the dice to operate.

See those little dots under each number? Those are called ‘pips and they are intended to help players understand the probability of a given number getting rolled. The most desirable are 6 and 8, and they have five ‘pips’. They’re so hot they’ve turned red. Meanwhile, 2 and 12 only have one pip. Thankfully, 2 and 12 each only appears once on the board. The desert can be thought of as a 7, and that’s a chance to punish or reward somebody. Every other number appears twice.

Each pip represents a 2.77% chance that that number will be rolled. A 3 has two pips, because it’s twice as likely to come up than a 2. A 6 has five pips because it is five times more likely to be rolled than a 2.

If you want to understand the value of a given intersection, all you do is add the pips. Of the three remaining intersections:

Pips just might be worth something different to you, in your own context. If you really need wool, and red/white won’t trade with you because you’ve been robbing them the whole time, then the 10-9-2 intersection is right for you, in spite of the value.

You can also use pips understand the relative strength of each player:

This is a very balanced map and a very balanced opening position. You can expect that everyone has an even or better chance of picking up a resource card every other turn.

If you understand the probability of events happening, you can also understand the relative value of the underlining resources. In this beginners map, the underlining resources are optimized (wood-brick-rock-wheat all have a 5 pip on top of them). Gluts of supply are very common in randomized maps. For instance, it’s possible for all 3 of the rock hexes to land under a 2, 12, and a 3! That’s right – 4 pips of rock on the entire map! (There are 58 pips on the board).

A pip isn’t a promise. If you apply the law of large numbers and a game of Catan went on for several hundred rounds, then all pips would perform equally. But they don’t, especially in the earlier rounds. Inevitably, when 5 is thrown for the fourth time in a row, and you’re not drawing cards, it can feel as though the dice are off or something is amiss. Yet, that’s just how randomness works. But you will still feel something as the dice fail to meet your expectations.

However, over the long haul, probabilities work out, and you end up ahead if you made consistent choices. (Unless the dice have been microwaved, at which point, if you have the power to throw out the dice, do so.)

Pips can be used to form expectations and may be used to plan courses of action in the future that consistently yield better results over time. While it is true that even with perfect knowledge about the past, there are patterns in nature that behave very similar to dice, though, not nearly as perfectly observable. And yet, in spite of that, it’s possible to make very informed decisions even if you can’t predict all the future outcomes, and in which sequence.

Especially when nobody else is really thinking the same way.