On occasion, I use data generated from surveys to experience some empathy with groups of people who I don’t frequently encounter and interview about their realities. A beautiful, publicly available data set is the PEW Internet and American Life Project’s August 2011 Apps and Adult SNS Climate data set. You can access the dataset here. Thank you PEW.

First, I want to give you some intuition about error.

Everybody has a rough idea of the gender breakdown between males and females in the United States. Roughly 52/48 or 51/49 and then the population pyramid skews female as men die off. In case you don’t have that general intuition – check this out.

Now look at the table, sourced from the PEW data set, below.

And that’s what you’re seeing – error.

To conclude that the tables that follow is worthless would be folly. You need only be conscious of what you’re seeing and eat more salt. For that reason, namely, error of around 7% (2SD), you shouldn’t tweet such stats as though they were absolute truth. They aren’t.

PEW asked people if they used social media. Here’s what 1716 Americans said in 2011:

Look at the column percentages for the ‘Yes, did this yesterday’ row. Note how it goes from 64.6%, then 55.2% for the next age group, then 42.6%, 30.5%, and finally 16.5% for those 65 and older. Note that slope. Based on that slope, while remembering how much error there is, you can assert that more younger people use social networking more frequently than older people. Dozens of Forrester data sets, which are not shareable, confirm that general finding. I dare say this might even be a fact.

So, great, we know that the reality for young adults is different for older adults. Let’s get that fact on the table.

What is social? Social networking means different things to different people. For instance, I include Reddit and the “place that must not be named” as social networks. I know of three people who vehemently disagree. The only agreement that matters in this context is popular agreement.

What is social to them? 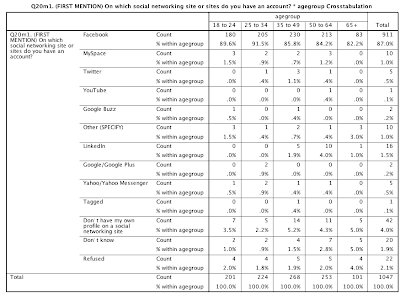 For most people, their very first mention is Facebook. Social media is Facebook. But what is their second mention? 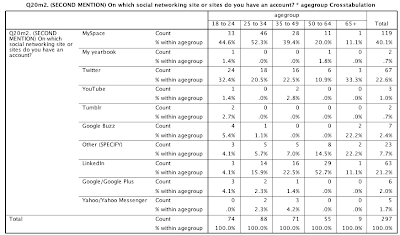 A majority across all age categories say that people mostly kind. In fact, many don’t really see cruelty all that often.

Check out the next table:

Again, note the trend among the categories for ‘frequently’. Is anybody really mean to them, personally? The vast majority are reporting ‘no, not really’. But, there is a slightly different reality for those 18 to 24. It would seem that more of them have been treated poorly than other age groups.

And, on the positive side, a majority says that they’re experienced feeling closer to somebody on a social networking site (Facebook).

People’s reality is Facebook and they’re having a good time with it. After all, everything about Facebook is engineered to generate positive interactions and sharing (to the point of over-sharing).

If I surveyed the edge of the edge social users, people who use additional mediums that require the production of content, I’d get a different reality.

That’s how a majority of Americans are experiencing social networking. And it’s very different from most of us who work and live entirely in digital.