ArtScience, in a marketing, is the combining of Art and Science at the same time. It is not, as some creative agencies have claimed, the utilization of data somewhere at the beginning of the creative cycle.

An ArtScience Groupe is hypothetical because it doesn’t exist in practice. You just can’t bolt on science in the upfront and expect the tyranny of the gut to adjust. Placing it upfront certainly gives the creative director the power to ignore what’s being said. But that isn’t collaboration in a manner that generates more or better novel ideas.

It doesn’t work.
It hasn’t worked.
It isn’t ArtScience.

The Strategic Activity System below describes the choices I think would need to be made to build such a Groupe. 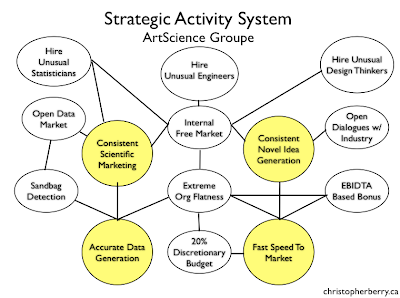 ArtScience begins with unusual statisticians, engineers, and design thinkers working together in an ultra flat organization. Unusual people generate unusual ideas. A flat organization is some insurance against regression to the mean. After all, hierarchies if left to their own devices ultimately serve themselves.

I believe in markets. They enable people with skills to find projects that need skills. The downside of the free market is that it’s not efficient. Free markets are messy. It’s a myth that they ever find equilibrium.

If you want to get things out to market very fast, and allow for the volume of ideas that are necessary to distinguish yourself in what is a commodity business, then you need to trust responsible people to behave responsibly with funds to get things out to market quickly. And that isn’t cheap. You’re not making clothes. You’re not baking brownies. You’re building something far harder.

I’m arguing that ArtScience Groupe’s will generate a much faster speed to market and more novel ideas. But it’s more expensive. If you understand why it has to be more expensive, then you can charge appropriately. It’s not a bad thing.

I discussed this idea at length with a number of analysts last week. There’s a healthy dose of skepticism. Concretely, a disbelief that people are capable of conducting themselves in a responsible manner, that the EBIDTA bonus is an inadequate motivator, and, to an extent, a rejection that modern project management practices are akin to the scientific management of the Soviet Economy 1928 – 1984. (Which I suppose is a little extreme).

My optimism in free markets, it would appear, is a minority one. (Which I find surprising!)

How many companies are really willing try it?

What do you think? What would you change? And would the parts all still work together?