There’s a campaign going on for MiO in Toronto.

I didn’t know much about it until Friday, when I saw this commercial:

I went to the Loblaws today, and, right at eye level, I saw the MiO. I recognized it. I picked it up.

So, the commercial ‘worked’, in that I paused in the powdered chemical section.

I looked for the nutritional information. After all, the MiO is in a bad neighborhood. Started reading the french side first – nope, not going to read that. Such tiny lettering. English side, great. Water…Citric Acid…propelyne….

I put it back.

I headed off to the gym, and, I wondered what had gone wrong. Here we had a really awesome commercial, some very convenient packaging that was designed to be transported, and good positioning. I wondered if I had been too quick to judge the MiO.

Got home and Googled:

Visited the site and found the nutritional facts: 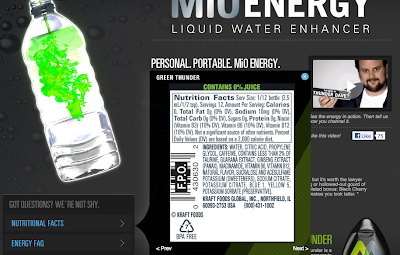 Much larger – thank you. And, there it is.

I spot the Vitamin B. I see it has caffeine. That’s something my body runs on anyway.

Okay, so, it’s sort of like liquid crystal light with some vitamins. That explains the bad neighborhood. I hate the taste of gym water (second, third, and fourth refills using the same bottle) anyway, so, I saw an application.

So I bought some.

A lot is going right for the MiO here. The commercial was risky enough to be divergent, to stand out and be memorable after just one exposure. The product was well demonstrated. It was placed, spatially, at a level that I could see it within the store. The digital presence poked up through Google just enough to counter the effect of local branding. And, the website contained information that made the difference.

Two things went wrong. I found the MiO in the powdered chemical area of Loblaws. That caused suspicion immediately. The packaging caused rage because I couldn’t read it.

Launching a new product is risky. Marketers have to pay a huge sum to interrupt the flow of a large target audience. They have to have a compelling value proposition to cause want, to inspire usage, or, put more technically, to induce the demand curve to shift to the right.

In this instance, in this specific case of a consumer journey, a point of a single anecdote, demand was generated, lost by placement, and won back because of digital.

Sometimes not all of the parts in a marketing system play nice.